Why Did Dropbox Redesign Their Branding?

The file storage service Dropbox recently made a splash on the Internet with its...um, bold branding redesign. But why'd they do it?

If you pay any attention to IT business news, you may have heard something about Dropbox—the online file backup and storage service—announcing that they had completely redone their company branding. But you really had to see the scope of the Dropbox redesign to fully appreciate why a small corner of the Internet briefly went nuts. The Dropbox.Design page has to be seen to be believed, featuring a smorgasbord of colors and fonts that can only be described as… eye-watering.

At the top of Dropbox’s very extensive statement about the redesign, the heads of the company’s design team state:

As our mission has evolved from keeping files in sync to helping keep teams in sync, we realized our brand needs to change, too. Our new brand system shows that Dropbox isn’t just a place to store your files—it’s a living workspace that brings teams and ideas together. The look is expressive, with vibrant colors, rich imagery, a versatile typeface, and playful illustrations.

Dropbox hasn’t wasted any time embracing this new approach. The look and feel of their website has been completely changed. Even their logo wasn’t left unscathed. You may have noticed their newly recolored app icon on your phone.

Dropbox actually takes the time to elaborate on why they have tweaked the logo:

The logo: More than storage

Our old logo was a blue box that implied, “Dropbox is a great place to store stuff.” The new one is cleaner and simpler. And we’ve evolved it from a literal box, to a collection of surfaces to show that Dropbox is an open platform, and a place for creation.

It’s clear that Dropbox is making a big push to be seen as a natural complement to Slack and other popular collaboration tools that have made big inroads with businesses large and small. However, the real-time reactions on Twitter and elsewhere suggested that many of their users were less than impressed by the company’s new aesthetic. Popular educational Youtuber CGP Grey summed up the Internet’s response rather concisely: 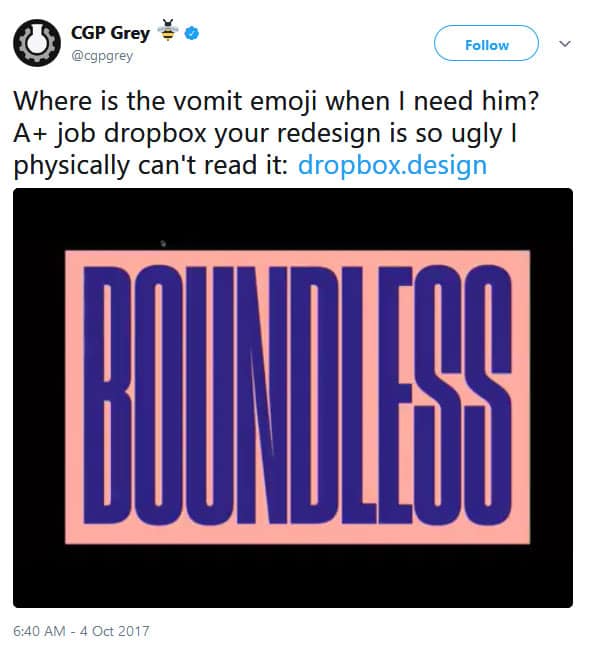 It’s easy to poke fun at Dropbox, and while the company’s plunge into the psychedelic void is entertaining, let’s take a step back and ask an important question:

What is Dropbox’s motive for their surprising rebrand?

It’s pretty obvious that the company is going through something of a midlife crisis as it tries to discern how best to reach out to the growing millennial generation of entrepreneurs and business owners.

But when a company makes this big of a shift in their image, it suggests a certain amount of misdirection, like a magician waving his hand to draw your eye while the other hand is actually doing the work. Dropbox wants to look sexy and up-to-date, a service rather than a boring old box for your stuff, because they want customers to see them as a premium product. And what does a premium product deserve more than a premium price tag?

After I got over my initial gobsmacked response to the Dropbox announcement, I quickly developed the hypothesis that Dropbox jumped into their rebrand in order to stand out from their competitors without having to actually compete on price point.  They want to draw enough attention that users don’t start price shopping, because they’re probably a lot more expensive than the competition.

To see whether my suspicion was correct, I started digging into Dropbox’s pricing.

Currently, Dropbox offers a Dropbox Plus plan for individuals for $9.99 per month, or $99 per year, which provides 1 terabyte of storage. There’s also a Professional plan which offers the same amount of storage with some additional features for $19.99 per month or $199 per year. Pretty straightforward, but if you want more than 1 TB of storage, you have to buy a business plan.

How does Dropbox’s price tag compare to what its competitors have to offer?

Google Drive appeals to users with minimal needs by offering an extremely low-priced $1.99 per month ($19.99/year) option for 100 gigabytes of storage. For more elbow room, you can bump up to 1 terabyte of space for $9.99 per month ($99.99/year). So, they’re pretty comparable to Dropbox, aside from the attractive 100 gig option.

On the corporate side, it gets more interesting. For $5 per user per month, you can get 30 gigabytes of space, as well as business Gmail support (full disclosure: our email is handled through Gmail). If you want 1 terabyte of storage (or unlimited if you have more than 5 users), the price jumps to $10 per user per month. They also have a super-fancy plan with a bunch of other features for $25/user/month.

Keep in mind, Google has a bunch of other products that integrate seamlessly with Drive, such as Google Docs, which allows teams to collaborate on and share documents, spreadsheets, slideshows, and more—something which Dropbox lacks.

Google is charging a much lower monthly fee than Dropbox: $10 per user for 1 TB/unlimited storage, versus Dropbox’s $15 for 2 TB or $25 for unlimited. If you want to go unlimited on Google, the minimum yearly price is $600 ($10 x 12 months x 5 user minimum) versus Dropbox’s $720. Don’t forget that this also includes email hosting—you’ll have your own shiny email addresses with your domain name.

And Dropbox doesn’t offer something comparable to Google Docs, though they’re trying to catch up with a new service called Dropbox Paper that is sort of a casual version of OneNote. Unfortunately, there’s no support for spreadsheets, slideshows, or other popular formats.

Microsoft OneDrive, like Google Drive, has a cheap teaser offering for individuals with an attractive price tag: 50 gigabytes of storage for $1.99 per month. For 1 terabyte, they only charge $6.99 per month, or $69.99 per year.

What makes the 1 TB plan really attractive is a little bonus feature: it includes a license for Office 365. For $30 less per year than Dropbox’s basic 1 TB plan, you get the same amount of storage, as well as full versions of Microsoft Word, Excel, PowerPoint, OneNote, Outlook, Publisher, and Access. Frankly, Microsoft Office is such an important business application that most people who use it may not realize that they get a terabyte of online storage included with it. Office 365 is the feature, and OneDrive is the bonus.

Also, if you need multiple accounts, for $99.99 per year total, you can upgrade to total of 5 TB of storage for 5 users, with 5 licenses for Office 365. While it’s not unlimited, for small businesses with teams of 5 people who don’t need infinite storage, $100 per year compares pretty favorably to what Dropbox and even Google are charging.

For businesses with teams of more than 5 people, OneDrive offers a plan with 1 TB of storage per user (but no Office 365) for $60/user/year, or unlimited storage for $120/user/year. For the primo package with Office 365, you’ll pay $15 per user per month, or $150/user/year—the same as Dropbox, but with the bonus of Microsoft’s productivity suite.

Dropbox is failing to keep up with the competition in terms of cost and services. It’s trying to compensate with a new marketing approach.

There are a number of other brand name competitors that Dropbox has to contend with, such as Amazon Drive and Apple iCloud, as well as lesser known basic file storage services such as IDrive, Box, and SugarSync. But the above makes it clear that Dropbox has not one, but two key issues that put it at a disadvantage when compared with the competition:

I had anticipated the first issue in my hypothesis, but overlooked the second. This second issue shouldn’t be underestimated in its seriousness. The Internet is littered with file backup services, but Google and Microsoft changed the game. Microsoft integrated their flagship Office product—which is used by nearly every business on the planet—while Google developed suite of its own from scratch and merged it with their file storage service. That added feature—the ability to collaborate on the types of documents that businesses create and share every day—makes them immensely more attractive to businesses than if they were just offering cheap storage.

Dropbox is clearly attempting to address the disparity with Dropbox Paper, but the product is lightweight and narrow compared to what Google and Microsoft are offering. It’s more of a means of ticking off a box in a features chart—“we support document collaboration!”—than a true attempt to compete. Dropbox does support Office 365 integration, but why pay for both 365 and Dropbox when Microsoft will sell you the software and file storage for less than what Dropbox is charging?

Dropbox is losing relevancy due to its hesitation to match the pricing of its competitors or invest money into expanding the utility of its service.

That’s why Dropbox set its branding on fire and did the equivalent of buying a Mustang and getting hair transplants. It wants to be position itself as Apple—a company that doesn’t need to compromise on price in order to control the marketplace. As it gears up for an IPO offering in the next few months, how likely is it to be successful in growing their user base?

Justifying marketing and branding costs comes down to a single question: Do they generate a profit?

Dropbox is probably overspending on their designers. Just a simple branding campaign can be incredibly expensive, let alone employing your own design team, as Dropbox does. Dropbox may be in a position where they’re trying to justify the cost of that investment by allowing them to throw every color and font at their product and see what sticks.

If they’re truly dedicated to giving the rebrand a shot at improving their profitability, one approach would be to monitor their sales performance over the next few months. If there isn’t a significant uptick, then it may make sense to reduce their design staff and related costs.

The concern is that they aren’t making a real attempt to address the concerns outlined above. Is their product better than what Google and Microsoft have to offer? Probably not. And yet, they’re charging more for it. That puts them at an obvious disadvantage, especially for customers looking to reduce their IT costs who discover that Office 365 includes a Dropbox-like service as a bonus feature.

Our mantra has always been that if you want to truly succeed and squash the competition, provide a better value. Too many companies think they need a fancy logo and great aesthetics to succeed, and spend tens or even hundreds of thousands on how they look, rather than on what they have to offer. We always encourage our clients to examine their marketing critically, look at the revenue it’s generated—or not—and then decide if the ROI justifies the marketing costs.

If Dropbox redirects their design costs towards improving their product and being more competitive in their pricing, then they probably have a better chance of preserving and growing their market share.